The 4 futures of marketing research

As published on Greenbook on Friday April 11, 2014. We all know the future will be fast and furious. It is fast, knowing that according to Richard Foster from Yale University the average lifespan of a company has decreased by more than 50 years over the last century, from 67 years in the 1920s to just 15 years today. It is furious, as new technologies are expected to further drive massive economic transformations and disruptions in the coming years. There is no escaping it: no matter what industry you are in, you can run but you cannot hide.
So how is the marketing research industry doing when it comes to adjusting itself to the ever-accelerating changes in the marketplace? Not all that great. Just recently, McKinsey reported that the research & consulting industry is at the bottom of the list in comparison with other industries when it comes to economic mobility. With traditional surveys and focus groups still dominating the scene, the speed at which our industry is changing is similar in many ways to the speed at which companies adjusted to the invention of electricity. It took well over a decade for companies to realize they no longer needed to build their factories near water, still considering water to be their prime source of power. We cannot afford a similar slow response now, with the speed of environmental change being far higher today than at the time electricity was invented.
Using data from the most recent GRIT study, Bottom-Line Analytics derived an interesting mapping of the top 20 innovators in marketing research. 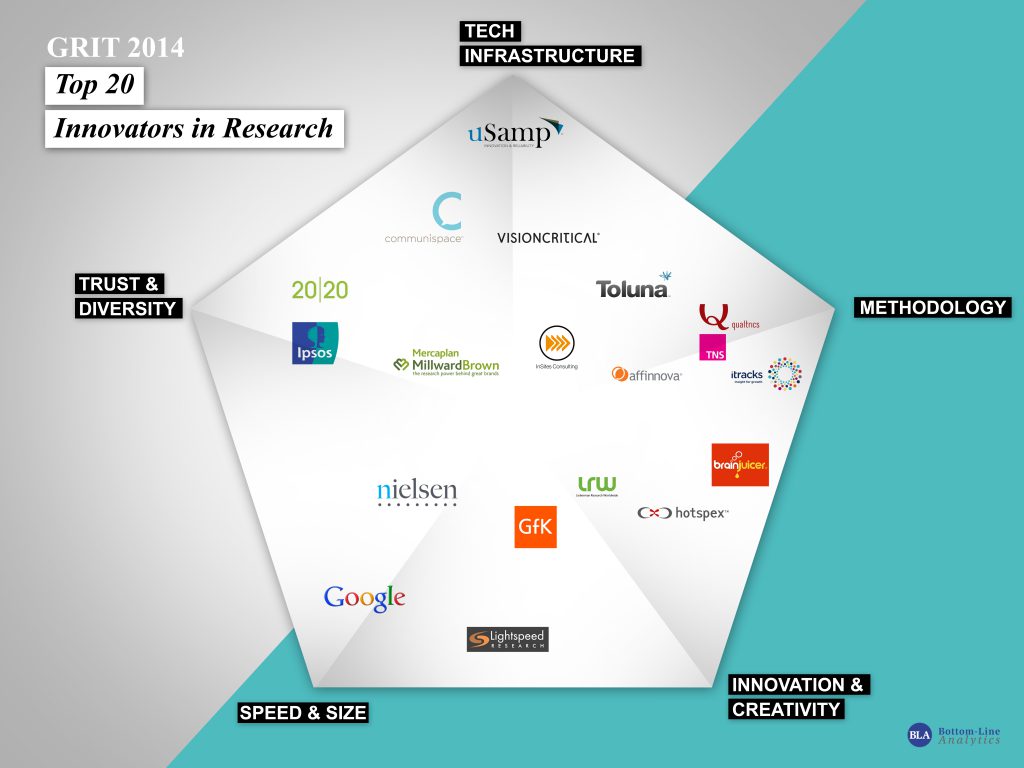 This mapping tells us something important about the most likely scenarios for the future of marketing research. I expect the industry to take 4 possible strategic directions over the next years, adjusting itself to the conditions of today’s economy:

Being in the midst of an unfolding economy of individuals, anyone being talented and creative can make it happen, with money nor power standing in the way. In an age of unprecedented power to individuals where we can 3D-print just about anything, we are about to witness a wave of disintermediation in our industry with clients taking over tasks directly that used to be performed by marketing service providers before.
Many of the presentations shared at the latest IIeX conference in Amsterdam touched upon powerful new technologies which enable clients to do just that, shaking up the entire industry. Google Consumer Surveys is a striking case-in-point, currently rolling out its business model across more than 40 countries. Lifting on a huge base of more than 1 billion Android users who get the Google Consumer Survey application pre-installed on their device, Google claims that its approach generates more reliable data as it taps into audiences which are less skewed towards market research (compared to research access panels) and as it demands less fill-out time from consumers given the limited number of questions. No wonder Google has just popped up in the top 10 GRIT list of most innovative research agencies in the world.

2. Making sense from ever bigger data

The speed at which we collect new data is several times faster than the speed at which we can structure, analyze and interpret that same data. Until 2003, mankind collected about 5 ‘exabyte’ of data bytes during its entire history. Today, we collect new data at a rate of about 10 ‘zettabyte’ a year or 2,000 times more in one year than in the whole of human history.
Gartner just recently published a study forecasting that about one third of the Fortune 100 companies is about to face an information crisis by 2017, not being able to convert data into insights. They may be right. Just think about the mysterious disaster of Malaysian flight MH370 acting as a symbol of violation of our faith in the information society. While we are flooded with satellite data, we struggle to get to the right type of information. I expect to see a bright future for companies who manage to find more needles in ever-growing haystacks, applying more creative, sophisticated and powerful techniques than we do today.

As human beings, we are all victims of our own limitations. We suffer from an illusion of knowledge bias, thinking we know more than we actually do. We suffer from a false consensus bias, starting from our own vision of the world, believing that everybody thinks like us and would make the same choices. We suffer from an observational selection bias, making us find new evidence to support our own false beliefs. We suffer from an agnosticism bias, not knowing what we do not know, focusing too much on what we do already know.
The Nobel Prize winner and intellectual godfather of behavioral economics, Daniel Kahneman, summarized a lifetime of research on human thinking in his book “Thinking, Fast and Slow”. His groundbreaking work teaches us that people primarily make choices according to ‘system 1’ thinking (fast, intuitive and emotional) as opposed to ‘system 2’ thinking (slower, deliberative and rational). A major part of the future of marketing research will lie in finding new ways to bypass consumers’ rational thinking and uncovering the real reasons behind behavior.

In the age of the Consumer-Innovator where consumers in the UK already spend more time and money on innovation than all consumer product firms combined, marketing research can finally benefit from tapping into the consumer collaboration domain. The people who were formerly known as consumers have turned into contributors and volunteers, composing a world full of problem solvers who are creating billions of dollars’ worth in value without even being paid for it. With consumers having increasing access to powerful online, social and mobile technologies, clever organizations can lift upon consumers’ desire, enthusiasm and ability to collaborate with brands if they create the required conditions for it.
Research agencies have a unique strategic advantage of having worked with consumers for ages, being in a far more powerful position than any other business strategy consultant, advertising agency or innovation firm willing to jump on the consumer empowerment bandwagon. The expertise and capabilities that research agencies have built over time provide a strong backbone and springboard to claim the consumer collaboration space. Clearly, this is the playing ground of InSites Consulting, using Consumer Consulting Boards as a leading method to bring consumers alive within our clients’ organizations.
Interested in hearing what you think about the future of marketing research!