InSites Consulting conducted a project for Bloomberg TV last year in which the content and marketing of the network were optimized in order to turn potential viewers into actual viewers. The method applied in this study consisted of a multi-phased Consumer Consulting Board with 68 viewers. In a first phase, the goal was insight activation; we relied on 2 weeks of observations via online blogs. Participants were asked to complete daily tasks such as e.g. journal assignments about their financial and business news consumption, a tour of their home and office as well as watching key Bloomberg TV shows and CNBC shows that they typically do not watch.
Next, the engagement with the audience opened up into a 2-week peer-to-peer discussion community. In terms of conveying the results, this project went beyond the traditional workshops and PowerPoint slide deck. Both an online and an offline printed magazine were produced, mirroring the high quality and style of BusinessWeek. I had a discussion with Greta Wilson – Head of Marketing – and Mark Uttley – Director of research – at Bloomberg about the why and the effects of creating such internal leverage.
“We are a news media company where people have very short attention spans and their interests change quickly”, says Greta. “The goal was to provide specific executives the ability to take the results with them, sit back, digest and spend time with the content at a moment that suited them. This magazine presented the results in such an engaging way that it makes going through the content enjoyable. While a TV show would have been ideal, it was not an option financially”, Greta continues. While the desire to share the results of the study was prevalent, Greta and her team faced the challenge of not having the results all over, but with the right people only. In order to do so, they used the simple technique of targeted envelopes. 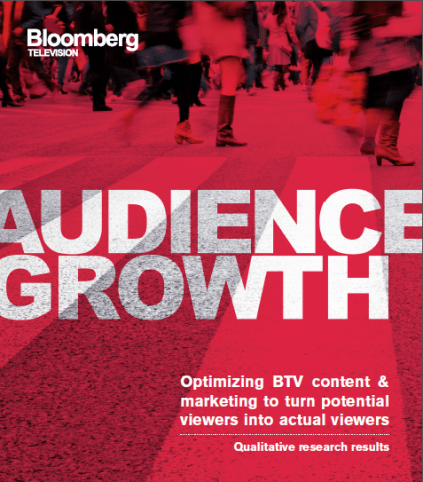 It all came together nicely for Bloomberg TV: InSites Consulting developed both content and design of the magazine, while Bloomberg had the internal small batch printing capabilities. “The first impact this had on people was that, when they saw and held the magazine, they were impressed with the product – while at the same time for us it was affordable. Next, it created momentum for subsequent research studies as managers would cherry-pick and deep-dive into the report”, Greta says enthusiastically. “But the really nice aspect of such an initiative is that it provides a longer afterlife for research”, Mark adds. In his period at Sony Music, Mark developed a magazine which was re-used repeatedly, “It kept on being carried around even 3 years later”. The Bloomberg TV study also still has a shelf life today. Greta still has a box of research magazines under her desk that she hands out to relevant people at the right time. “It is important that the study still has that shelf life. While we do not do tons of research, we always have relevant content from our audiences to share with executives to inspire them”, Greta says.
“What you really want to achieve with research”, Mark says, “is cultural and behavioral change. Such change is often more important than the insights themselves”. In my opinion Mark raised a great point there. He states that considering and using ‘insight as content’ within companies is key to changing the executives’ perception of what an insight could be or do for managers. “If you provide consumer observations in such a way, you incite people to activate insights themselves, they will chat and start brainstorms about it…” according to Mark. In fact, it will result in some form of crystalized DNA for managers when going to the market.

The key take-away for me is that very few consumer insight and market research professionals think out of the box. They need to rattle the cage but simply forget to market their core product – namely consumer observations and connections – internally. The solution for research professionals lays in initiatives such as the one at Bloomberg or Sony: provide content that is relevant, creative and experiential – “experience the consumer without losing science”.