Consumer Collaboration around the World: Europe [1/6]

Meet our Collaboration around the World series. Every article in this blog series overlooks the state of consumer collaboration in different parts of the world. This based on recent travels around the globe to speak at conferences, talks with moderators from our proprietary Global Community Moderator Network, experiences with client projects and fresh figures from a new global consumer survey. First up is Europe!

Compared to North American companies, European MROC (Market Research Online Communities, or Consumer Consulting Boards as we prefer to call them) and collaboration service providers typically offer smaller, more intimate online communities rather than the bigger community panels. In order to get as much as possible out of the Consumer Collaboration initiative, European researchers have established deep long-term relationships with (a small group of) participants through:

Especially on the continent, communities are seen as a dominantly qualitative research tool. While in North America the focus lies rather on short quantitative surveys with a fast turnaround. 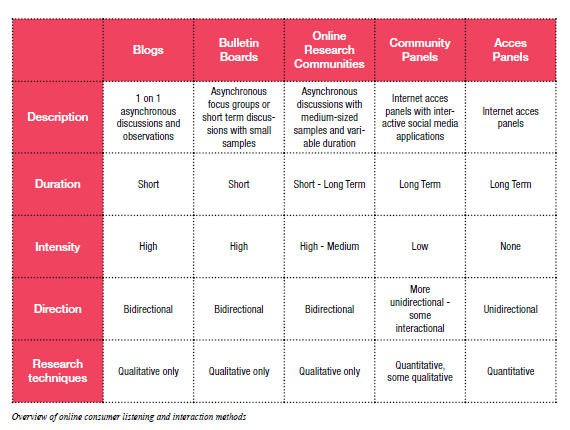 Given the large number of smaller markets with different languages and cultures in Europe, it is less easy to scale and to immediately profit from bigger long-term collaboration projects. Which entails that a significant number of community projects in the European market are still short-term ones. But in a lot of the cases it is a step up towards a more structural collaboration with consumers. Especially in more conservative/risk-averse research markets such as Germany and France, ad hoc projects are a great way to pilot the methodology. In more progressive markets such as the Netherlands (because of the country’s high Internet penetration and advanced social media usage, in combination with their open-minded business culture), we notice a major shift from ad hoc to a more continuous collaboration with consumers.
On my European travels, I spoke with many clients who see this as a logic next step. They also believe that a deep integration with the company processes is required in order to create a true consumer-centric-thinking organization. The qualitative nature of the communities in Europe certainly helps this to become a reality, as it allows for a true co-creation dialogue between the companies’ employees and the consumer world.

The cultural diversity within Europe has forced the players on the continent to invest in their language capabilities. InSites Consulting for example can run communities in a variety of languages and in 30+ countries, through our network of trained and certified moderators around the globe.

The clash between the North American and (continental) European School happens in the UK market, as that is where all major players are represented. A few weeks ago I spent a week in London with clients and it was striking to see that clients tend to move away from the bigger panels. They start to see more value in building a real relationship with participants and having a true co-creation dialogue and more structural collaboration between consumers and internal stakeholders. Panels – in the large sense of the word – have not proven to be a great solution for a lot of companies as they were rolled out as a new market research capability that would allow to perform quantitative research in particular more rapidly and more cost-efficiently. Embedding them in the business and demonstrating the real value beyond the numbers and the walls of the research department has been a pain for a lot of clients I talked to. For most internal stakeholders, it always will be market research or a survey. The qualitative aspect of those (community) panels is often not used sufficiently and even under-developed in terms of toolbox, methodological vision and practical experience, which leads to superficial qualitative research results and more shallow and less meaningful insights.
The trend is that smaller, qualitative communities are becoming more popular. Some clients go for a long-term community rather than a panel, others dig into their mainly quant panel to start a qualitative community and a third group is combining both by using the panel as a source to recruit from.

The East is catching up

While being and speaking at the ESOMAR CEE Research Forum in Bucharest earlier this week, I clearly felt that Central and Eastern Europe are catching up on the digital divide. Internet penetration in most countries in the region is still lower than in the Western part of Europe, but figures from a recent online global consumer survey we conducted (CEE region represented by Russia, Poland and Romania – detailed research results will be shared in the coming weeks) show that the Internet behavior and expectations towards brands are pretty similar to the rest of the world: 75% of the online population is on Facebook, 44% accesses social media platforms through their smartphone and 83% of the population wants to co-create with a brand they like. The latter is perfectly in line with the global figures! So, depending on the target group (more urban, slightly younger and higher educated), a community is definitely a method with major potential.
Our own experiences with projects in countries such as Poland and Russia for clients such as IKEA and Danone for example were great. But it is important to take into account cultural differences which have an impact on the way you motivate participants (more extrinsically), the style of the moderator (offering more guidance to participants and acting more like an authority) and the way you write your conversation topics and let them perform co-creation tasks (first ask feedback on existing products/concepts, then ask for their ideas, not the other way around).
For now, it are mainly the multinational clients who pilot the method in this region. And we notice the same trend as in the rest of Europe: thinking big, but starting off small – ad hoc projects before moving on to an ongoing community.

For the first time in 4 years, we notice a drop in the number of people in Europe who want to collaborate with brands. Over the last 3 years the number went up from 1 out of 3 to 86%. This year it has decreased again to 76%. What happened? Consumers in Europe possibly expect a lot from co-creation and collaboration with companies, given the deeper relationship and the dialogue. Brands which did not do this well enough have disappointed consumers, which is reflected in the final percentage. In order to avoid a collaboration hangover in Europe, brands need to start an in-depth, continuous online co-creation dialogue with their customers and integrate the collaboration practice in the companies’ processes. This will allow for more action being taken by companies and their employees to implement the learnings and insights into daily business practices and operations. Furthermore, treating consumers almost like part-time employees (or real advisors to the business) is the only way to keep them on board in the long run. The main issue here is demonstrating that their work has real added value for the business and makes products and services better for them and their peers.
But, let us conclude that the future of research communities and Consumer Collaboration in Europe looks bright, with a lot of innovation going on at the suppliers’ side and clients realizing that they need to go for a real and ongoing dialogue with consumers and a deep integration with company processes!
Find out more about our community approach in the free e-version of our Consumer Consulting Board book on www.consumerconsultingboard.com.