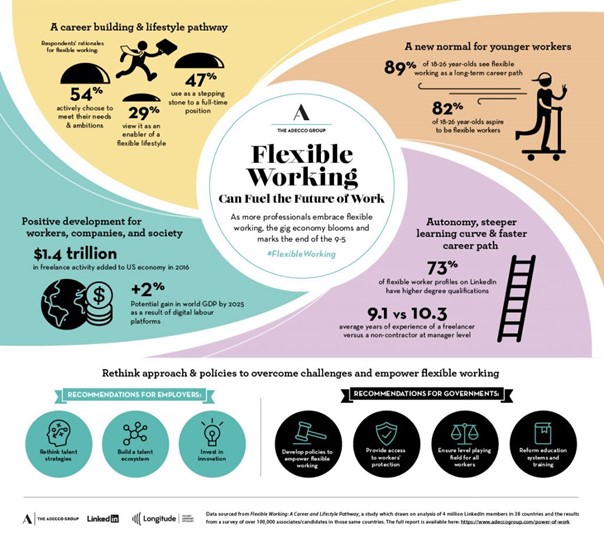 The Adecco Group, the world’s leading provider of temporary staff, permanent placement and career transition, has released a white paper that seeks to elucidate the growing trend of independent work – especially among younger generations. Independent work can go by many names and under many guises, but its growing importance is evident, with The Adecco Group noting that “by some estimates, 20-30% of the working age population in developed countries is involved in flexible labor to some extent… this kind of work added $1.4 trillion to the US economy alone; in Europe, the annual figure is €270 billion.”

As a result of this growing trend, The Adecco Group, working alongside LinkedIn and InSites Consulting, sought to go beyond the numbers and to understand which motivations are driving this increase in independent workers and to what extent this is a welcome development.

A survey among 100,000 of Adecco’s associates showed that the majority (54%) finds flexible work as a means to pursue their own particular interests. The drive to reach their own goals and be in control of where they are going is seen as a more common motivator than being forced to engage in work that is a stop gap before a permanent position becomes available – with 34% expressing this opinion.

InSites Consulting provided some more context to these feelings, focusing a deep dive of activity on a long-running qualitative Consumer Consulting Board for Adecco that focuses on Gen Y trends and opinions towards work – the board included over 100 participants aged 18-26 from all around the world. This research for The Adecco Group ran alongside our own research into the attitudes of Millennials towards work found in our Millennials at Work bookzine.

We could see that the majority of independent workers do view independent work positively, as it gives them a level of control over their life that they do not anticipate finding in more formalized workplaces. Independent workers consider themselves to be highly skilled, entrepreneurial and self-employed, working at their own pace and in control of their own future. This strongly follows InSites Consulting’s own findings in its Millennials at Work bookzine, which highlights that Millennials are more individually empowered than the generations before.

This link with determining their own future is seen from The Adecco Group’s work with LinkedIn. A large percentage of the estimated 15 million independent workers active in Europe and the US have a higher education degree and on average work in roles with a greater seniority than their peers with employment contracts. This sense of driving their own agenda forward and finding paths to success outside the more traditional routes available is no surprise, and neither is their ability to reach seniority quicker than their contracted counterparts.

Having identified a growing group of workers that are content in their position and that also expect a growth in this sector, The Adecco Group also calls upon public institutions to help foster this development to open up the opportunity to more workers to pursue this course of employment. This includes a greater emphasis on educating younger generations in the skills that are required to thrive in this manner of work – in particular networking and project-based skills. A call to governments to allow for an even playing field in terms of social security systems so that “contingent workers can have the necessary protections without undermining the benefits of flexibility” is also put forward.

Lastly, they encourage “employers to reassess how they approach talent management and consider how they access the human capacity to get different business tasks done rather than simply hiring in-house employees to do so.”

The need for employers to take on responsibility and reassess and potentially re-define their companies to appeal to a more empowered Millennial generation is explained in InSites Consulting’s Millennials at Work bookzine.

Want to explore how your brand can connect with this woke consumer? Discover what our Gen Z research toolbox and expert power can do for your brand!

51% of Gen Z in South Africa is uncertain about the future. Discover what global issues are worrying them, and how they will tackle injustice!

Gen Z, the activist generation. Discover here how this affects what Gen Z in South Africa expects from brands.