Ditch the office hierarchy [an interview with FREITAG]

A while ago, I interviewed Oliver Brunschwiler from FREITAG, the brand that recycles truck tarps into authentic bags and accessories. One of my first questions was if he could tell me more about his function and role within the FREITAG company; strikingly, it turned to be the most difficult question of our talk ;-). Read on to discover how FREITAG has ditched office hierarchy and is applying a ‘holacracy’ system in their organization.

Q: Thanks for taking the time for this interview. To kick off, perhaps you could explain what your job at FREITAG is all about, what exactly it is you are doing at the company?

Oliver: “Well, that’s not such an easy question right now, because we recently ditched our hierarchy system and are now working under the holacracy banner. Holacracy is our new operating system. We are no longer talking and acting as managers, directors or CEOs. We even had to tell our CEO that we didn’t need him anymore, with all sorts of consequences. In fact, holacracy replaces the original top-down model with a system that spreads power distribution across the organization. The idea behind it is that titles often stifle creativity and can entail an unproductive hierarchy. Replacing the top-down organization creates a more united, cohesive and effective organization.” 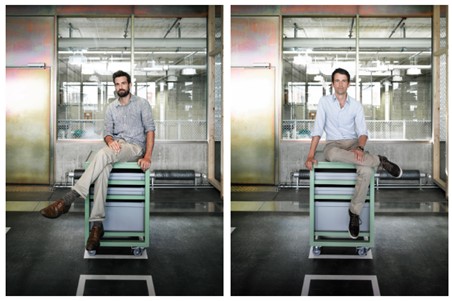 Q: Who decided that? The two FREITAG founding brothers?

Oliver: “Yes, of course! The two founders didn’t have a CEO role, they were Chief Creative Directors. They had the feeling we were still in search of our perfect organizational form, and also that we needed a more agile system.

Holacracy is not about delegation, it’s about self-delegation, responsibilities of roles for the company and not for the owners or for your boss. On the other hand, it’s very structured and strictly formatted in terms of meeting formats.

My current main role is Commercial, which includes sub-circles such as product development, sales channels, communication and creation. So, I am representing the Commercial Circle and I am the so-called Lead Link of the Commercial Circle, which is not the boss of all the roles and people, but the one responsible for assigning the people to the necessary roles within the Circle.

It’s a very agile system, meaning people can easily switch circles and roles. Right now, we are still in the starting structure, although there have already been some minor shifts in roles, but nothing too drastic. Everybody is able to work on all roles within a circle, which makes it very dynamic.

Next to the Lead Link role in the Commercial Circle, I have twelve other roles. For example, one is called Creative Direction, which is a multi-filled role with the founding brothers and another coworker. And then there are other roles like Host for our frequently organized conferences. But my main role right now is Commercial and, translated into the hierarchy world, LinkedIn or the likes, you’d probably say Head of Commercial or Chief Commercial Officer, Creative Director and member of the board or something – you name it.”

Q: How do decisions work in this system? Who takes the final decision?

Oliver: “It’s based on accountabilities. For example: another one of my roles is called Angebotsgestalter (‘Offer maker’). As Angebotsgestalter, I’m responsible for strategic collaborations. The accountability is: kicking off strategic collaborations for the company – which automatically makes me responsible for making decisions within that specific scope of work. Or, for example, I have a role that is called Creative Lead for certain communication projects; one accountability there is deciding which creative concept will be released. So, it’s not an open tournament, but a very agile system of decision makers.

And it’s not one person that makes decisions for others, but many making their own decisions, based on their individual accountabilities and roles. And that can give surprisingly courageous decisions sometimes, because people start to care for the company, instead of just following the leaders’ choice.

If you don’t agree or your work should be done differently, you go to a so-called Governance meeting and work on the job, changing accountabilities, add policies, create and shift roles etc. This way all tensions can be dealt with on the spot and will not be swept away by hierarchy. Everything surfaces and that sort of transparency is necessary for fast-growing and creative companies. Like for example in the IT industry: sometimes IT companies in the US must grow from 50 to 500 people in just a few months; how can you onboard 450 people within a few months? How can you create a culture when people don’t know each other? It seems impossible. You need an effective operating system, and that’s what holacracy aims to implement.”

Q: You mentioned the IT industry. Were you inspired by Silicon Valley models of organizing work, or…?

Oliver: “We have probably had ten organization restructurings. Nothing really worked for longer than one or two years. We realized we needed something more drastic, so the idea of getting rid of hierarchy was already seeded, but we didn’t find a system to really implement it. Until recently, when I started working with a web development agency for our new e-commerce platform. They had introduced the holacracy system, and when one co-founder told me about the system and how it worked for them, it got the ball rolling… So yes, the IT industry did inspire us ;-).”

Oliver: “Very recent indeed; we only started last fall. Right now, the system seems to fit our organization in comparison to other companies. For example, a big Swiss Telco also shifted parts of their company to holacracy, but for me this seems more experimental, for us it’s the full monty. Let’s see how we progress.”

Q: How do you evaluate whether it’s an improvement?

Oliver: “We did of course set matrixes to evaluate the system. Our strategic growth and our business plans remain very important; if anything there looks alarming, we might need to hit the brakes and refine the system in certain areas. But right now, it feels like a good match.”

Q: One of the KPIs is probably employee satisfaction?

Oliver: “Indeed, these figures will be evaluated after a certain time, offering an overall scope on the system and where we need to take action, if necessary.”

The next generation are changing the office landscape! Curious how Gen Z looks at work and live their life? Visit our expertise page to discover what our Gen Z thought leadership and expertise can do for your brand.

Healthcare is a fundamental necessity in all societies, and we all engage with it at some point in life. Read on to discover how innvative disrupters find their way into the healthcare landscape.

In South Africa, 45% of Gen Z feels stressed. Find out how Gen Z’s mental well-being was affected by the pandemic and their other stressors.